Selina is an artist and writer whose work has been shown and praised internationally. Her practice is intimate, political and participatory with a strong emphasis on public engagement. As a result, it leads to provocative and highly visual work that seeks to connect with those historically excluded by the arts. 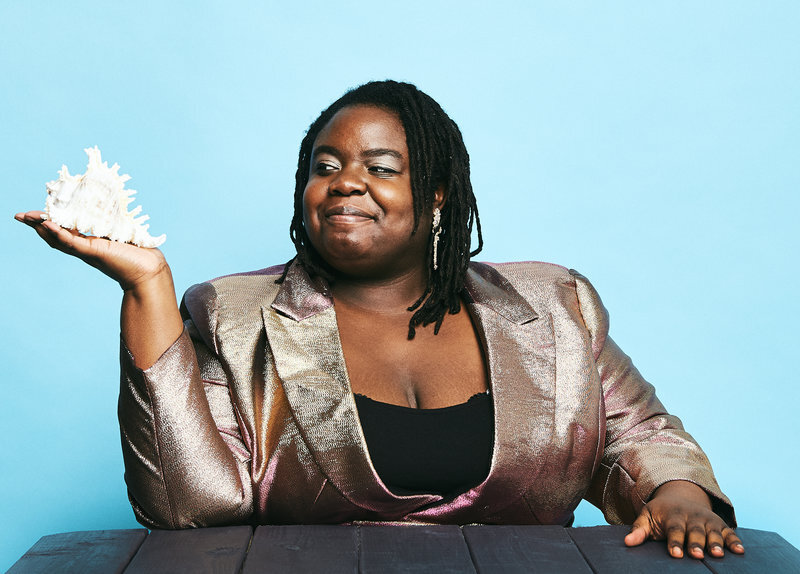 Selina Thompson - Photo by Boxed Studio
“My work usually involves spectacle, it holds it together at its centre. My work is often playful, intimate, urgent and located firmly in the grey area of personal meets political.” Selina Thompson

She was featured in The Stage 100 Most Influential Leaders 2018 and awarded the Forced Entertainment Award in 2019.  Our credits include BBC Radio, the National Theatre Studio and The National Theatre of Scotland as well as theatres across the UK, Europe, Brazil, North America and Australia.

Selina has been described as ‘a force of nature’ (The Stage) and ‘an inspiration’ (The Independent). She believes in the power of art, though the industry is perhaps killing her slowly, and she is trying to build a life that feels like it embodies the changes she wants to make.

When she is not working, she is probably on the phone to her mum, in her quiet peaceful flat, surrounded by plants, her cat and mountains of books.

Selina Thompson Ltd (STLtd) is an interdisciplinary company that makes work that is urgent, playful and intimate.

Since 2012 the Company has made theatre shows, installations, workshop plans and radio work for pubs, clubs, shopping centres and performance spaces across the UK and the world. In 2016 STLtd retraced a route of the Transatlantic Slave Triangle by Cargo ship and went on to create Salt, which has since toured to four continents and won three awards. In 2017 the Company was commissioned as part of 1418NOW to begin a major new work looking at radical futures for democracy in the wake of the Suffragettes. And in 2018 they began to write their first mid-scale musical work, bringing together a Hip Hop Icon and the dreams and energy of teenage girls from across the world. In 2020 they are back with new dreams about new democracies, and race and gender after the end of the world.

The Company currently consists of Selina Thompson, Sarah Cruickshank and Toni-Dee Paul, supported by a team of collaborators and the board. They advocate for the rights of artists as workers, and better approaches to wellbeing in their industry. They make passionate, rigorous, political work, full of joy, but with a clear focus on those excluded by society at large. They hope their work will always be characterised by ambition and integrity.

Built from a chorus of breath collected in parks and spaces across the borough, the sound is a moment of cleansing and defiance, taking a sound we are surrounded by and tuning into its beauty at a time when breathing has never felt so loaded. Immersion culminates in choral performances across Tower Hamlets and at Artsadmin’s Toynbee Studios, amplifying and strengthening the sound, and tuning in to the defiance of borough’s history. It is a moment to remember the sacredness of air, of living in a constant cycle of inhalation, transformation and exhalation with the planet and each other.

Immersion is one of the commissions for Season for Change, a UK-wide programme of arts activity focused on a step-change in climate awareness, activism and justice, delivered in partnership by Julie’s Bicycle and ArtsAdmin.

Artists Selina Thompson and Ama Josephine Budge discuss the possibilities for new futures of artistic practice amidst the climate crisis. Part of Season for Ex-Change, a three-week programme of free online events for artists, arts organisations and cultural practitioners.

What Shall We Build Here

A festival of art, climate and community

What Shall We Build Here is a festival of art, climate and community at Artsadmin’s Toynbee Studios in Aldgate East, across east London and in your local supermarket.
From mini-golf for dogs to outdoor drag performance, coffee mornings to a sober party for healing, Artsadmin invites you to events that imagine ways of living together that are just and sustainable for people and the planet.

What Shall We Build Here is part of Season for Change, which is spotlighting artists’ climate leadership in the run up to COP26.